This raffle has ended! Check back for future raffles.

Oath Keepers is proud to work with James Jaeger of Matrix Entertainment and Dr. Edwin Vieira to document various Constitutional themes which are vital to the American experience. While our world continues to explode with political insanity abusive government power,  We The People need all the reinforcement we can get regarding our original, organic Constitution for the united States of America. James Jaeger, inspired by the writings of G. Edward Griffin and Dr. Edwin Vieira, Jr., continues to chart the lawful path we should all embrace as we try to awaken our fellow Americans to the absolute necessity of puting our dearly-beloved UN-cle Sam back into his Constitutional box.

Documentary films are powerful examples for all Oath Keepers as tools for RT&I (Reach, Teach, and Inspire) as we encourage all who swear [or affirm] the Oath to learn the meaning embodied in that Oath and to live up to it.  This past week I received an email from Paul Stramer of Montana, who is one of Oath Keepers’ strongest contributors of  ham and short-wave radio knowledge.  I will duplicate that email below.

Oath Keepers members have contributed to the production of the movies described in the email, and several Oath Keepers officers, including myself, appear in the movies. We here at Oath Keepers feel justifiably proud to be a part of James Jaeger’s productions. I would like to personally thank all of our members and friends who have helped make these film possible.  I encourage all members to purchase the two-DVD set described below and hold home-viewings for family and friends. The set makes a great gift for patriots.

But also of importance is the fact that after James re-coups his cost in producing each film, he places it online for free viewing. James does that because he believes in the message and wants to spread it far and wide. Here is the link for James’ Constitutional series online.  Enjoy these movies for free, and share the link, but if you want to help James continue to produce these films, please consider purchasing copies or donating to the cause. Oath Keepers appreciates your support for this series of documentary films. (See below)

Here is the email Paul sent this week —

The most comprehensive line up of experts ever assembled on the “right to keep and bear arms” — MOLON LABE and MIDNIGHT RIDE explain why the Second Amendment and the three Militia Clauses in the U.S. Constitution are vital for a free state. 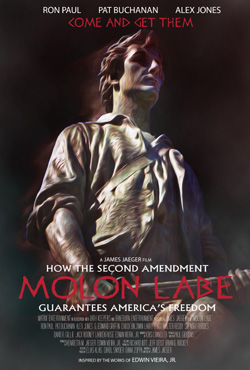 MOLON LABE is a primer on the Second Amendment and the Militia System.  MIDNIGHT RIDE explains what could happen if rogue politicians were to violate the Second Amendment and what is already happening as a result of the erosion of the Militia System.
MOLON LABE – the sister film to MIDNIGHT RIDE – was inspired by the book, The Sword and Sovereignty by Edwin Vieira, Jr.  This feature documentary explores the power of the sword and how it guarantees America’s freedom.
MIDNIGHT RIDE – When Rogue PoliticiansCall  For Martial Law

Featuring:
RON PAUL * PAT BUCHANAN *EDWIN VIEIRA * STEWART RHODES * LARRY PRATT * ALEX JONES * G. EDWARD GRIFFIN * PASTOR CHUCK BALDWIN * SHERIFF RICHARD MACK * LARKEN ROSE * ELIAS ALIAS * DAN HAPPEL * WALTER REDDY
MIDNIGHT  RIDE – inspired by the book, BY TRANNY OUT OF NECESSITY: The Bastardy of Martial Law also by Edwin Vieira, Jr., – explores the nature of martial law and how it relates to the Second Amendment and Militia Clauses of the U.S. Constitution.
History has demonstrated time and again that, to the degree citizens are unarmed or disarmed, government suppression and tyranny are inevitable.
The Founders of the United States knew these lessons well.  This is why the U.S. Constitution not only acknowledges and guarantees the “right to keep and bear arms” – but the DUTY to be well-organized as State Militia.
But this duty, as well as the Militia, are often misunderstood.  As a result, a “gun-control lobby” has been steadily eroding the original intent of the Founders by passing unconstitutional gun control “laws,” funding a standing police state and destroying the 300-year old Militia System established by WE THE PEOPLE.
If you value Liberty and the U.S. Republic established by the Founding Fathers, get and study MOLON LABE and MIDNIGHT RIDE – both available as a special 2-DVD Combo at www.MoviePubs.net.

If you like our films and want to support their production and receive screen credit, watch the trailers for our new film in production, MAINSTREAM – How the Hollywood Movies & New York Media Are Promoting the Globalist Agenda and donate.  They’re at http://www.mecfilms.com/mainstream.html#trailers

REUTERS: Turkish Army Attempts CoupClarification for Media: Oath Keepers Will NOT Be Going Armed into Cleveland During RNC or Assisting With Security There