This raffle has ended!

Check back for future raffles. 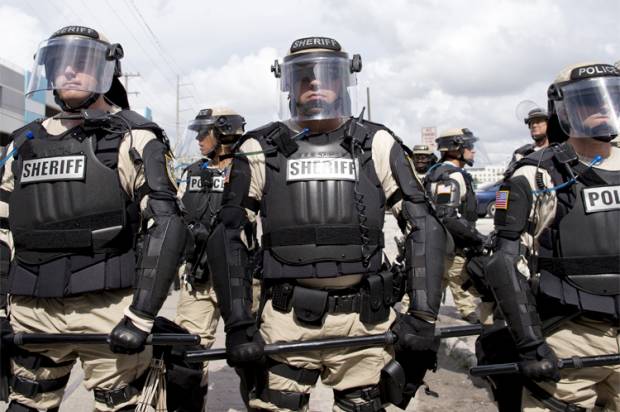 Stewart Rhodes and I were talking this week about the militarization of police. As do all Oath Keepers, we firmly oppose the current morph from community policing to federally militarized and federally subsidized abduction of the people’s local protection. This is obviously being done by converting modern-day cops’ mentality via intensely regimented and combative perspectives, perceptions, and attitudes. All trainees are expected to believe and apply the mindset in their personal mentality. For job security and advancement, to pay the bills at home where the spouse is raising the kids, high pro and con marks on one’s record assure a government retirement on whatever highest level of advancement one’s career offers.

Even as Stewart and I were talking, St. Louis (Ferguson) Missouri was sending shockwaves across the nation. Stewart and I decided that Oath Keepers must get the word out to all current serving that a militarized police force is the antithesis to the free state envisioned by our founders. Within hours of that conversation I began to get links to articles which examine the problem of the militarization of our police. I’d like to share with readers here a couple of truly rewarding articles and link to them.

First I’d like to recommend the latest from Dr, Edwin Vieira, Jr. He seems to be saying that we now have a choice to make – do we want to live in a police state, or would we rather be our own police by reinstating the now-lost Constitutional “Militia of the several States” mandated by our founding documents? With his remarkably lucid and penetrating vision Dr. Vieira paints a detailed look in reality at the clear message in the Constitution. His work defies contradiction and is generously endowed with sourcing and documentation. I can’t say enough good about the man. Please enjoy –

The Bastardy of Martial Law

Now, people are becoming increasingly worried about the imposition of “martial law” in the course of some jury-rigged “national emergency”.They are being told by “the Powers That Be” that “martial law” is legitimate, and that sufficient steps are being taken to prepare for it—especially in the para-militarization of State and Local “law-enforcement” and “emergency-management” agencies…

No threat of “martial law” would exist if Americans were properly organized in “the Militia of the several States”, because any constitutionally valid form of “law” that needed enforcement by “martial” institutions against civilians would be the civil laws of the Union and of the several States executed by the Militia—that is, by WE THE PEOPLE themselves.

Even the half-witted rogues in the Disgrace of Columbia would think long and hard about the inadvisability of attempting to invoke “martial law” if WE THE PEOPLE awakened to their own constitutional authority in the Militia; refused to recognize the legitimacy of any form of “law” that needed “martial” enforcement against civilians, but was not executed by or under the control of the Militia; organized themselves for the purpose of revitalizing the Militia by means of State legislation under the States’ reserved constitutional authority in that respect; and through that effort prepared themselves to oppose “martial law” even if that legislation could not be enacted in time in every State.

It is worse than simplistic to dismiss the members of various “private militias” scattered across this country as mere rustic buffoons who stupidly imagine themselves capable of employing Eighteenth-Century tactics to save America from Twenty-first-Century tyranny. For they at least understand that it is more intelligent to put some extra lifeboats on the Titanic before she sails, than to attempt to cobble a few together from deck chairs as she is sinking. They at least comprehend that it is more prudent to organize their families, friends, and neighbors into what they mistakenly call “militia” before a nationwide crisis breaks out and “the Powers That Be” invoke “martial law”, rather than afterwards…

Indeed, if the misplaced enthusiasm for “private militias” did not derive originally from the machinations of agents provocateurs and agents of influence despatched by the CIA, the FBI, or the BATF, it ought to have. For nothing could be more useful to “the Powers That Be” than: (i) to goad patriots into expending their energies on purely private and uncoordinated activities, rather than on efforts to revitalize the constitutional establishments which embody and empower popular sovereignty; (ii) to deceive patriots into becoming suspicious of and antagonistic to “government” in general, so that they will disdain seeking the specifically governmental authority which the Constitution offers them (indeed, requires them to exercise) through the Militia; and (iii) to mislead patriots into disarming themselves of such a status, so that, in a crisis, when they are asked “What is your constitutional authority?” the honest answer must be “We have none.”

Next let’s venture over to a Left Gatekeeper site to see what a writer for the ACLU has to say about the militarization of local police across America. This article is packed with details and facts which reveal the horrible mindset as it is injected by Wall Street, Washington D.C., and the Military-Industrial complex into the mind of today’s rookie police trainee by a “power elite” which uses government assets to control the society which funds their power. Since our founding Oath Keepers has lamented the great travesty called the “war on drugs”.  That did more than any other single factor to create the militarization of police. I recommend highly this article from Tom’s Dispatch as presented at Salon Magazine, here –

One nation under SWAT: How America’s police became an occupying force

August 14 2014 by Matthew Harwood for TomDispatch.com

As Karl Bickel, a senior policy analyst with the Justice Department’s Community Policing Services office, observes, police across America are being trained in a way that emphasizes force and aggression. He notes that recruit training favors a stress-based regimen that’s modeled on military boot camp rather than on the more relaxed academic setting a minority of police departments still employ. The result, he suggests, is young officers who believe policing is about kicking ass rather than working with the community to make neighborhoods safer. Or as comedian Bill Maher reminded officers recently: “The words on your car, ‘protect and serve,’ refer to us, not you.”

This authoritarian streak runs counter to the core philosophy that supposedly dominates twenty-first-century American thinking:community policing.  Its emphasis is on a mission of “keeping the peace” by creating and maintaining partnerships of trust with and in the communities served. Under the community model, which happens to be the official policing philosophy of the U.S. government, officers are protectors but also problem solvers who are supposed to care, first and foremost, about how their communities see them. They don’t command respect, the theory goes: they earn it. Fear isn’t supposed to be their currency. Trust is.

Nevertheless, police recruiting videos, as in those from California’s Newport Beach Police Department and New Mexico’s Hobbs Police Department, actively play up not the community angle but militarization as a way of attracting young men with the promise of Army-style adventure and high-tech toys. Policing, according to recruiting videos like these, isn’t about calmly solving problems; it’s about you and your boys breaking down doors in the middle of the night.

SWAT’s influence reaches well beyond that.  Take the increasing adoption of battle-dress uniforms (BDUs) for patrol officers. These militaristic, often black, jumpsuits, Bickel fears, make them less approachable and possibly also more aggressive in their interactions with the citizens they’re supposed to protect…

Take the 1033 program. The Defense Logistics Agency (DLA) may be an obscure agency within the Department of Defense, but through the 1033 program, which it oversees, it’s one of the core enablers of American policing’s excessive militarization. Beginning in 1990, Congress authorized the Pentagon to transfer its surplus property free of charge to federal, state, and local police departments to wage the war on drugs. In 1997, Congress expanded the purpose of the program to include counterterrorism in section 1033 of the defense authorization bill. In one single page of a 450-page law, Congress helped sow the seeds of today’s warrior cops.

The amount of military hardware transferred through the program has grown astronomically over the years. In 1990, the Pentagon gave $1 million worth of equipment to U.S. law enforcement. That number had jumped to nearly $450 million in 2013. Overall, the program has shipped off more than $4.3 billion worth of materiel to state and local cops, according to the DLA.

In its recent report, the ACLU found a disturbing range of military gear being transferred to civilian police departments nationwide. Police in North Little Rock, Arkansas, for instance, received 34 automatic and semi-automatic rifles, two robots that can be armed, military helmets, and a Mamba tactical vehicle. Police in Gwinnet County, Georgia, received 57 semi-automatic rifles, mostly M-16s and M-14s. The Utah Highway Patrol, according to a Salt Lake City Tribune investigation, got an MRAP from the 1033 program, and Utah police received 1,230 rifles and four grenade launchers. After South Carolina’s Columbia Police Department received its very own MRAP worth $658,000, its SWAT Commander Captain E.M. Marsh noted that 500 similar vehicles had been distributed to law enforcement organizations across the country.

Astoundingly, one-third of all war materiel parceled out to state, local, and tribal police agencies is brand new. This raises further disconcerting questions: Is the Pentagon simply wasteful when it purchases military weapons and equipment with taxpayer dollars? Or could this be another downstream, subsidized market for defense contractors? Whatever the answer, the Pentagon is actively distributing weaponry and equipment made for U.S. counterinsurgency campaigns abroad to police who patrol American streets and this is considered sound policy in Washington. The message seems striking enough: what might be necessary for Kabul might also be necessary for DeKalb County.

In other words, the twenty-first-century war on terror has melded thoroughly with the twentieth-century war on drugs, and the result couldn’t be anymore disturbing: police forces that increasingly look and act like occupying armies…

Oath Keepers cops are the finest in the world. We lament that they are, however, a mere fraction of the total number of police in America, and our great concern is that our current-serving cops who will honor their Oath to the Constitution may be in coming times, or even already today, penalized for doing so. What we saw in Pittsburgh in 2009 and in Ferguson, Missouri in 2014 are signs of the times. As Dr. Vieira points out, perhaps we’d be wise to reinstate the Constitutional “Militia of the several States“, just as the Constitution requires.

But along those lines, one of our readers has brought forward the question of whether a standing police force is or is not a Constitutionally lawful entity, and I will soon share that essay with our readers here, just after discussing it with my favorite scholars of the Constitution. The direction being achieved by militarizing our cops is to train them to be an occupying force under the control of the Federal government and its minions instead of being our friendly public servant  whose job was once to “serve and protect”. One thing I can say right now is that if the police were not being militarized and Feducated, the people themselves would not be predisposed to ask that question. The fact that the question has come up is a sign. Be aware – we may have slid further away from our Founders’ intent than we think.

How America’s Police Became an Army: The 1033 ProgramEdwin Vieira: The Bastardy of Martial Law